A lot of software’s such as WampServer, Adobe Photoshop and other Adobe products fail to start with an error message MSVCR100.dll, MSVCR110.dll, MSVCP110.dll or MSVCP100.dll file missing. There are other software’s too which is affected by this error in windows 10.

I would like to list some of the software’s that are affected. This is not a complete list, they are the ones’s I am aware of. The could be many others too.

What is the error message?

“The program can’t start because MSVCR110.dll is missing from your computer. Try reinstalling the program to fix this problem.”

“The program can’t start because MSVCP110.dll is missing from your computer. Try reinstalling the program to fix this problem.”

What is causing this problem?

Let me begin by explaining what is causing the issue so that you understand what fixed it.

Most of the time, programs that run on windows are built using Visual Studio, a proprietary software specifically designed for software development on the windows platform. Installing Visual Studio installs various components and language tools to develop and run the application such as Visual C++, Visual Basic, Visual F#, .Net Libraries, etc. To develop applications based on C++ for windows, Visual C++ is used which provide C++ compilers, GUI and other tools specifically optimized and created specifically for Windows operating system, be it mobile, desktop or tablets. For these software’s to run, there are run-time components of Visual C++ libraries required to be present on the host computer on which the application is being installed. These components are required to run C++ applications that are developed using Visual Studio and link dynamically to Visual C++ libraries.

Most of the time, Visual C++ Redistributable Packages is shipped with the Windows OS and is installed by default but may not be the one that is required by the application you want to run. This is why it is always a good idea to update your system so that you don’t fall into such problems later on. Applications such as Adobe normally installs the Visual C++ Redistributable Packages when you install the Adobe application if it is not present on your system. But there are software’s such as WAMP Server which does not install the redistributable package and provides a warning while installing that these packages must be present and has to be installed separately. Here is warning screenshot from WAMP. You get this while installing the WAMP Server. 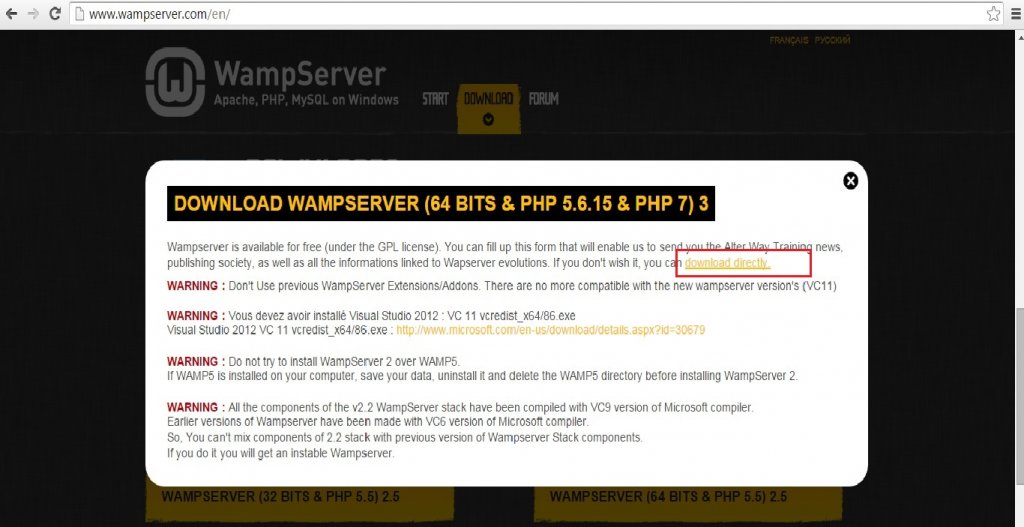 How to fix the error?

The solution is simple. Install Visual C++ Redistributable package provided by Microsoft required for that application.

Which version of Visual C++ Redistributable package to install?

This is often confusing and I would like to add some clarity to it.

Each version of Visual Studio, such as Visual Studio 2015 or Visual Studio 2013 is shipped with a separate version of Visual C++ Redistributable package. The version you need to install depends on the version of visual studio used to develop the software. This is difficult to figure out and why would you want to know this? Often we do a google search with the error message and try to figure out which version to use from the help forums or various other search results. This then solves the problem only for the particular software you want to install.

But my take is, why would you want to tackle this problem individually, software by software. Why not install all the Visual C++ Redistributables package for the most popular Visual Studio Versions available in the market. That is to say, all the releases in the past 5 years, which is just four. This will cover almost all the software’s and you will never see this problem again. This will also safeguard you against all the other problems related to missing library files from Visual C++ Redistributable packages. You can argue that this is overkill, but considering the fact that the files to download are less that 15MB and takes less than 5 min to install, we are not taking more than 30 Mins of effort. A small inconvenience I guess. Also, installing multiple versions will not affect four system in anyway. On the contrary, it will make your system more stable.

How to Install the Visual C++ Redistributable Package

This page will take you to the latest supported VC++ Redistributable page from Microsoft. Alternatively you can download the insatllers from the below links.

Visual Studio 2008 and 2005 are really old versions. If you want to install their corresponding Redistributable package, here are the links. You can skip this if you want. Still installing them will do no harm.

Below is the screenshot of all the versions of Visual C++ Redistributables installed on my Computer. This is to give you an Idea about what what we are doing.

This is the screenshot of multiple Visual C++ Redistributale installed in windows 10, Control Panel- Program and features.

What if the problem is still not fixed?

Given that this is the best solution, even if installing it does not fix the issue, please uninstall it and try installing it again.

Other alternatives to fix the problem

You will come across blog posts where they have recommended downloading the .dll files from links they provide and pasting it in system32 folder. Personally I have not tried it and normally I do not download dll’s from unknown sites or not provided by the Original Software vendor itself. They are hacks which can work but I find it very risky. Just so you know, no Software Vendor provides individual DLL’s for download.

Thanks for visiting my website and if it is not too much to ask, Please don’t forget to post your comments and subscribe to my Blog to get email alerts for my latest blog posts.

Next Post: How to Install Lubuntu 16.04 Xenial Xerus on VMware Workstation 12 pro