What is Visual C++ Redistributable Package and how to Install, Uninstall or Reinstall in Windows 10

This post is applicable to all the previous versions of Windows such as Windows XP, Windows 7, Windows 8 and the latest Windows 10. The information in this post is generic in nature and will apply to all the future releases of Windows unless Microsoft decides to provide the C++ runtime libraries in any manner other than the Redistributable packages.

Lets start the discussion with the concept of Runtime Libraries so that you have a better understanding of C++ Redistributable Package.

We hear a lot about “Runtime” in computer programming. What do you mean by Runtime?

You hear things like, the program crashed. All it means that during the execution (runtime) of the program, some issues occurred which led to the abnormal termination of the program. You also hear things like “my computer crashed”. This means that some program crashed during the execution or runtime which had the effect of crashing the normal operation of the computer. This is where you have to force restart or power off the computer so that the bad code is wiped out of memory.

This is why any program is thoroughly tested before it is released to public. During testing, the aim is to see that the program runs successfully during runtime. But even after exhaustive testing, there can be certain issues that can go undetected. They are called bugs for which the company (also called Software Vendors) provide patch or updates which is aimed at fixing the problem.

The bugs that has gone undetected and the software has been shipped or released to public are called vulnerabilities. Hackers try to find these vulnerabilities in order to gain access to the system. This is why it is very important that people keep their system up to date with the most recent security patches.

The errors that we encounter during runtime are called runtime errors.

What is a Runtime Library?

We write computer programs and run them to see the output. When we run a program, do you think, is it just your code that runs or are there other associated codes that are also run simultaneously?

To answer that question, computer programs do not run in isolation. That is, when you execute a program, there are other programs that are called to successfully execute your program. All this happens during runtime, that is when the program is being run in realtime. Normally you don’t get to see these programs when they are being executed. None the less they are there. These programs provides the execution environment, that is the underlying platform on which other programs can run.

Java provides it own runtime environment which is also called the Java Runtime Environment(JRE). To run any java program you have to have JVM installed on your computer. Similar for .NET, the runtime environment is called Common Language Runtime(CLR) which is shipped with the windows operating system.

Programming languages such as C, C++, Visual C++, Perl, etc.. provide their own runtime environment which takes care of the execution of the program when it is run.

Visual C++, popularly known as VC++ is the Microsoft version of one of the most popular programming language C++. VC++ is optimized for windows OS and also provides various functionalities suitable for application development on the Windows platform or targets machines that run on windows OS.

If you want to use C++ instead of VC++ for developing your project in windows, you can use the compiler provided by GCC which is based on the open source project. You can explore MINGW to find out more.

Please note that you can also use VC++ to write traditional C++ applications. GCC libraries are not really required for developing application using C++ in windows OS. You can use Visual studio to write C++ as well as VC++ programs.

What is Microsoft Visual Studio?

One of the most widely used IDE (Integrated Development Environment) for application development on Windows Platform is Visual Studio. Visual Studio is one of the finest IDE available in the market today. It allows developers to develop application using Visual C++, Visual Basic, C# etc…

Visual studio is a very costly product but there are free versions available which you can try.

What is Visual C++ runtime libraries?

So, as a developer, you will not find any issues while developing applications, but when you decide to distribute (that is, sell for a price or for free), the real problem occurs. That is, the target machine on which these applications will be installed should also have the VC++ runtime libraries. Otherwise, the application will not install. Even if the program installs, they will not run and you will see error messages such as missing msvcp110.dll file.

What is Visual C++ Redistributable package?

These are the VC++ runtime libraries that needs to be present in the computer for the applications to run which were developed using VC++ using Visual Studio.

Why are there so many different versions of Visual C++ Redistributable package?

So, if you are installing a desktop application on your Windows machine, chances are that they will require Visual C++ Redistributable package to be present on your system. That is why it is a very good idea to install all the version of Visual C++ Redistributable package. This why you dont have to bother about the version of Visual Studio that was used to develop the application.

Do you have to manually install all the versions of Visual C++ Redistributable package?

Which version of Visual C++ Redistributable package to install?

This is often confusing and I would like to add some clarity to it.

Each version of Visual Studio, such as Visual Studio 2015 or Visual Studio 2013 is shipped with a separate version of Visual C++ Redistributable package. The version you need to install depends on the version of visual studio used to develop the software. This is difficult to figure out and why would you want to know this? Often we do a google search with the error message and try to figure out which version to use from the help forums or various other search results. This then solves the problem only for the particular software you want to install.

But my take is, why would you want to tackle this problem individually, software by software. Why not install all the Visual C++ Redistributables package for the most popular Visual Studio Versions available in the market. That is to say, all the releases in the past 5 years, which is just four. This will cover almost all the software’s and you will never see this problem again. This will also safeguard you against all the other problems related to missing library files from Visual C++ Redistributable packages. You can argue that this is overkill, but considering the fact that the files to download are less that 15MB and takes less than 5 min to install, we are not taking more than 30 Mins of effort. A small inconvenience I guess. Also, installing multiple versions will not affect four system in anyway. On the contrary, it will make your system more stable.

How to Install the Visual C++ Redistributable Package

This page will take you to the latest supported VC++ Redistributable page from Microsoft. Alternatively you can download the insatllers from the below links.

Visual Studio 2008 and 2005 are really old versions. If you want to install their corresponding Redistributable package, here are the links. You can skip this if you want. Still installing them will do no harm.

Below is the screenshot of all the versions of Visual C++ Redistributables installed on my Computer. This is to give you an Idea about what what we are doing. 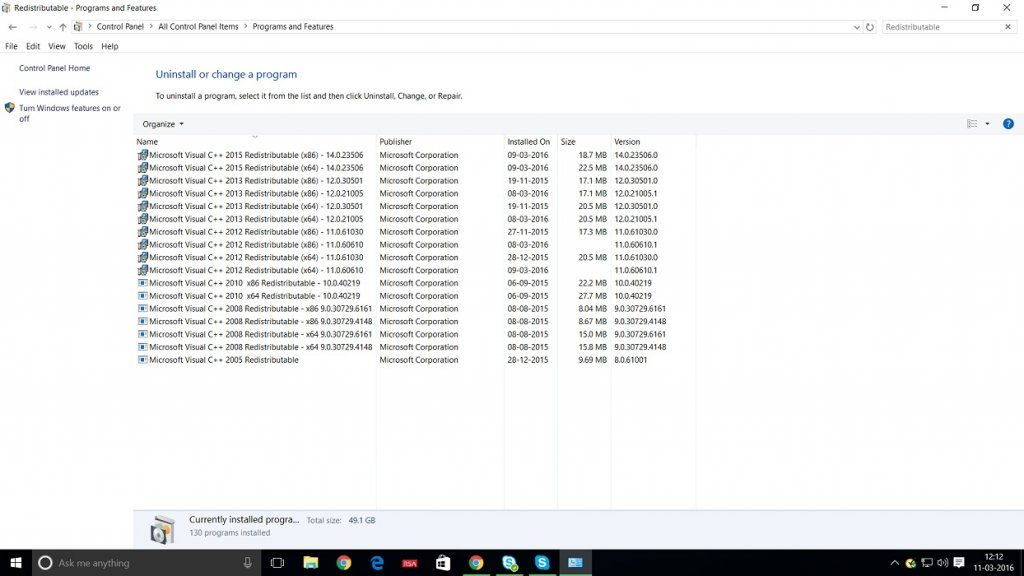 This is the screenshot of multiple Visual C++ Redistributale installed in windows 10, Control Panel- Program and features.

How to Uninstall and Reinstall Visual C++ Redistributable?

This again is as simple as installing and uninstalling any other windows program. You have to go to the Control Panel->Programs and Features in previous version of Winodws. In Windows 10, Settings->Apps->Apps & Features, select the Visual C++ Redistributable package you want to uninstall, and click to uninstall. After you uninstall them, you can reinstall them in the usual manner.

Should you be concerned about the multiple versions of Visual C++ Redistributable package installed on your system?

Next Post: How to find out if Intel VT-x or AMD-V Virtualization Technology is supported in Windows 10, Windows 8, Windows Vista or Windows 7 machine